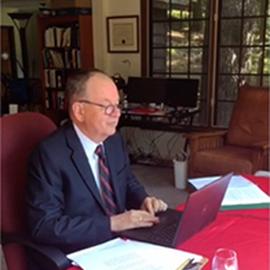 Glenn spent his childhood on a farm near Caney, Kansas, studied mathematics at Princeton, and served in the Peace Corps in Afghanistan before launching his academic career. In 1976, he published A Mathematical Theory of Evidence, launching a widely used methodology for handling uncertainty in expert systems, the Dempster-Shafer theory of belief functions. An international organization, the Belief Functions and Applications Society, is devoted to the continued development and use of this theory. His most recent book is Game-Theoretic Foundations for Probability and Finance, co-authored by Volodya Vovk and published by Wiley in 2019. Glenn believes that the game-theoretic foundation for probability will reshape the interpretation and use of probability in many fields. It leads to new methods of statistical testing and forecasting, clarifies how speculation can lead to the apparent random behavior of market prices, and deepens the analysis of causality in Glenn’s 1996 book, The Art of Causal Conjecture. Further research on game-theoretic probability is posted at www.probabilityandfinance.com.